These are some books I’ve been reading or listening to in the months of February and March. Hope you enjoy them too.

Nick Offerman gives a glimpse into his Ron Swanson-like life. He starts in his childhood where he grew up on a farm, transitions to acting school in Chicago, works on several plays then finally ends up as Ron Swanson on the ever-popular Parks and Rec.

This book is not only a history of Offerman’s life, but also shares his personal philosophy, ideas about life, and even a song. Because of the song, I would definitely recommend the audiobook (or just watch it on YouTube). His dry sardonic humor is seen throughout the book and I was laughing all the way through. Offerman has an immense vocabulary and cleverly inspires you to be a better person.
A great theme from his book is his adamant plea to get the reader to craft something with his or her hands. He shows how this lost art has improved his life and can easily improve the lives of others. One chapter discusses the value of hand-written cards and how a little creativity can show more love and care than just buying something expensive. He talks about how he has made cards from a board, paper products, and even a pair of panties.
Offerman’s book is intelligent, interesting, and should be on a must-read list. Paddle Your Own Canoe: One Man’s Fundamentals for Delicious Living

This book discloses the story of Stuxnet – a virus famous for inhibiting nuclear production of the Natanz facility in Iran. The ingenious virus infected the Simmons PLCs – computers that control industrial equipment – and changed the frequency of the spinning centrifuges to physically damage them and slow down production. Zetter does a great job of weaving a mysterious story in between technical descriptions of the virus code and political conflict.
The story is told in a deductive way revealing three main characters that deciphered the virus and never gave up. Chien, Fallier, and O’Murchu solve various parts of the code. There are, not one, but four zero-day exploits used in the virus. The source of the virus is not surprisingly the United States and Israeli governments.
As an IT person, I found the story and the virus details to be interesting, however the political parts of the book seemed dry to me. I would recommend this book to anyone who is interested in technology, politics, or learning more about Stuxnet. It can be a little boring at times, but I think Zetter did the best anyone could have with the story that existed. Countdown to Zero Day: Stuxnet and the Launch of the World’s First Digital Weapon 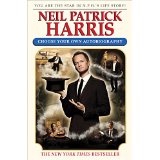 Most would agree that Neil Patrick Harris is a funny guy – there is no exception when it comes to his autobiography. It is written in the style of a Choose Your Own Adventure book, and is probably one of the only autobiographies written mainly in second person.
Not only is the format of the book clever and hilarious, but the content is great too. Learning about NPH, his love for magic, his career in two long-running TV shows as Doogie Howser and Barney Stinson. His book does not seem conceited, but is a genuine look into his life. I would recommend the hard copy of this book over the Kindle edition or the audiobook, because you’ll be flipping through the pages and reading out of order. Neil Patrick Harris: Choose Your Own Autobiography

This science fiction adventure involves video games, aliens, China, politics, and scientific advancements. The story follows Wang Miao, an applied-research scientist who is working on creating a nano-material called flying blade gets caught between a rough-edged cop, the military, and a secret society of scientists that plots for the destruction of the human race.
The book gives a peek into the Chinese Cultural Revolution, which is something I was unfamiliar with. The Cultural Revolution began in the 1960s and led to the formation of the People’s Republic of China under the Communist government system. As a Westerner, this was a topic of interest to me. Learning about different ways of life and understanding them from a native’s perspective is always interesting to me.
The rich description of the video game in the book is astounding. Describing a video game would generally seem boring to me, but the author grants the reader access to a virtual world that seems almost real.
This book was hugely popular in China and I can see why. It is well thought out. I don’t normally read science fiction, but I would recommend this book. I loved the voices on the audiobook. Shi Qiang’s – the gruff police officer’s – voice is my favorite. The author did not try to add Chinese accents to the translated book, which I appreciate, as the book characters in the book were originally speaking the same language as the narrator. I can’t wait until the two other books in the trilogy are translated. The Three-Body Problem